One of the primary concerns people often have about dental braces is the aesthetic impact of the metalwork on their smile. Especially for adults, the prospect of wearing unattractive metal braces for long periods of time can be very discouraging. Invisalign® offers an almost invisible aligning system that straightens teeth fast and contains no metal. 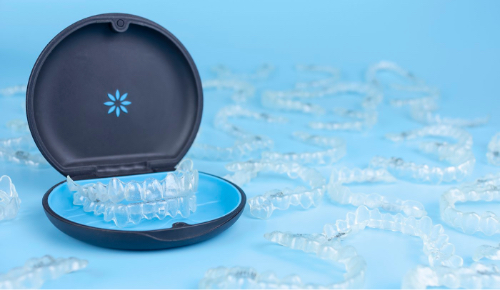 What does Invisalign® treatment involve?

First, the dentist needs to devise an initial treatment plan before creating the special aligning trays. Three-dimensional digital images are taken of the entire jaw. These images allow the dentist to move specific teeth on the screen, view the jaw from different angles, and also foresee what the face might look like in years to come. In essence, this technology can show how Invisalign® trays will change the facial aesthetics.

Once planning is complete, a unique set of aligners is made. The total amount of aligners required varies with each individual case, but 20-29 sets per arch is typical.

What are some considerations when wearing Invisalign® trays?

Life with Invisalign® aligning trays may take several weeks to get used to. The trays should be worn constantly, except when eating and drinking. It is important to remove the trays when consuming food or drink because food can become trapped between the tray and the teeth, causing tooth decay.

Usually, new trays are necessary every two weeks, and progress between appointments can be seen with the naked eye. There is no doubt that Invisalign® aligning trays have revolutionized orthodontics. Invisalign® is renowned for being both comfortable and effective.